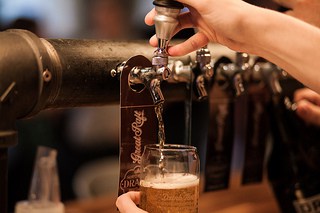 16 May THE BEST CRAFT BEER IN NORTH JERSEY

Posted at 08:04h in Limo Service by DesignME

CRAFT BEER IN THE GARDEN STATE

With summer well on its way, people are getting their weekend plans and vacations in order, looking forward to some time off, some fun in the sun and some indulging.

If it’s a trip to the beach, a night at the theater or a lively outdoor concert, one thing is certain: in an area as dynamic and cultured as North Jersey, there’s plenty to keep your calendar filled.

One thing you might not know about Northern New Jersey is that they have an impressive selection of craft beer destinations that will ensure your weekend is as enjoyable and tasty as possible.

Even if you aren’t a beer drinker per se, these craft beer destinations could make you a believer.

The first step to creating the perfect craft beer experience in Northern, New Jersey is to find a trustworthy car service company to handle your transportation.

With alcohol in the picture, you want the peace of mind that comes with having a dependable ride home. Without further ado, here are our top four craft beer spots in Northern New Jersey.

Cloverleaf, located in Caldwell, New Jersey, is an impressive destination not only for craft beer, but for some of the best atmosphere in the Garden State. The Tavern has been in continuous operation for over 75 years, making it one of the oldest establishments for craft beer in the area. The beer list is staggering and might take more than a minute to read, with domestics, imports, local breweries and specialty high gravity beers populating each category.

Cricket Hill Brewery in Fairfield is lauded as one of the best brewers of craft beer in the Northern Jersey area. As a microbrewery, Cricket Hill pays incredible attention to each batch of beer they brew, using on the finest ingredients and the highest quality brewing processes. From pale ales to IPAs to summer breakfast ales, Cricket Hill has something for the beer lover in us all.

Lauded as the first exclusive wheat-beer brewery in the United States, the High Point Brewing Company prides itself on offering some of the most dynamic and enjoyable beers in the country. Their head brewer draws his influences from the time he spent in Germany, and he even uses rare yeast found only in Bavaria in the Brewery’s impressive Ramstein beers.

The Cask and Kettle Homebrew Company has a little bit of everything for the beer lovers among us, including an impressive variety of their own brews, as well as all the tools and ingredients you’ll need to produce your own fantastic homebrew. If you love craft beer and have been looking into producing your own variety, Cask and Kettle is the place to be.

THE STIRLING HOTEL: THE TAVERN ON MAIN STREET

If you’re looking for a unique pub experience with enough craft beers on draft to truly boggle your mind, the Stirling Hotel is the place to go. Located conveniently on Main Street, the Hotel has been offering up craft beer and delicious food for over 30 years. In addition to their impressive beer list, they offer wine, cocktails and other spirits, if you have people in your party who aren’t beer drinkers.

photo credit: Shreveport-Bossier: Louisiana’s Other Side via photopin cc