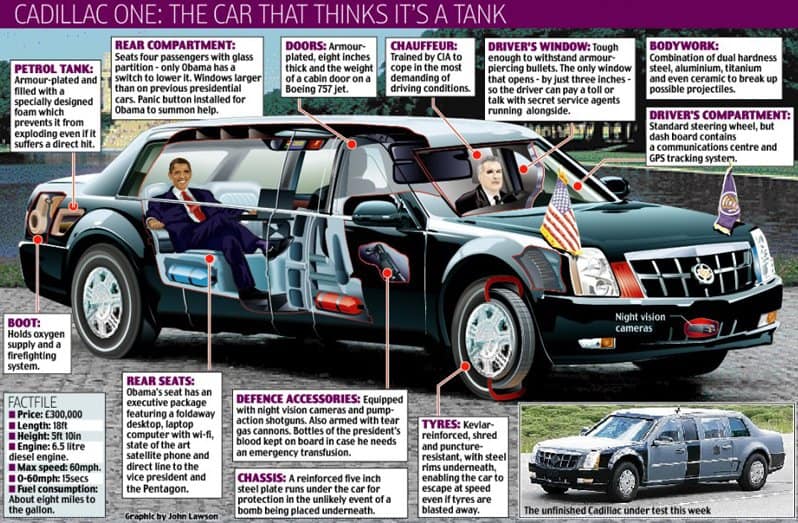 Posted at 03:16h in Limo Service by DesignME

You know that song “You can’t always get what you want”, well that saying also goes for the leader of our country!

Limousine car service for the President is a lot more complicated than he originally thought. President Barack Obama said today that he originally wanted his presidential limousine to boast a hybrid drivetrain. So what keeps the ruler of the free world from getting what he asks for? In this case, it was the Secret Service. Obama’s bodyguards said that a hybrid engine couldn’t produce the kind of power necessary to scoot the massive Cadillac down the road in an emergency situation. That’s saying something, considering the Cadillac Escalade Hybrid boasts a V8 with enough power to have a 7,700-pound towing capacity. Part of us thinks it might also be a security concern to have a vehicle that may be more susceptible to electronic interference from nefarious sources, but that’s just a guess.

No one’s exactly sure what the Commander-in-Chief’s car has under the hood, but it’s a good bet that it has eight cylinders and enough torque to move a mountain of armor plating. We hear it’s a diesel and we’re guessing it probably gets fuel economy on par with most RVs.

Obama’s pining for a hybrid limo came to light during a speech about the government’s recent purchase of 5,000 of hybrid cars and trucks for federal use. No word on whether or not the executive branch got the General Motors employee discount.

Although Executive Limousine of Bellmore doesn’t have a Presidential Limousine like Barack’s, and if you don’t need a bulletproof limo with machine guns cannons, that can drive through buildings. We do have many Luxury Cars, Vans, SUV’s, Limousine’s and Party Buses to choose from for any occasion!!