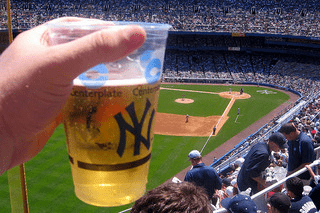 Take me out to the ball game, take me out with the crowd! Are you excited? Baseball season is just around the corner! The New York Yankees have been an institution in New York since 1903. They boast of some of the most famous names in baseball history: Mickey Mantle, Babe Ruth, Yogi Berra, Lou Gehrig, and Joe DiMaggio. The opening day of the Yankee’s is more than just a chance to watch a regular baseball game. It has become a way for fans to show their loyalty with hopes of starting the season off right. So, if you are planning on being in New York City on April 7th, 2014, you may want to consider stopping by Yankee’s Stadium for a glimpse at an iconic part of America’s pastime.

HOW TO START THE DAY

They always say breakfast is the most important meal of the day, so you definitely don’t want to skip it on Opening Day. You’ll need to keep your energy up, so the best thing to do is sit down for a piece of New York history while noshing on some good food, too.

Just around the corner from the famed Yankee’s Stadium is the Royal Coach Diner. Stop in with your family before heading over to the game to fill up on one of the best breakfasts you may ever have in your life.

Since the Yankee’s have been such a long standing icon for the city, you can honor them by taking a guided tour of New York City. Get the true New York City experience by hopping on one of their “Hop on Hop Off” bus tours. It allows you to see the parts of the city you want at a pace you and your family set.

Once you’ve filled up on breakfast, head out on a tour of the most famous landmarks New York City has to offer. Check out Fifth Avenue, Radio City, Lincoln Center, and the Cathedral of St. John the Divine by riding the Uptown Loop. After that you can head on over to SoHo, Greenwich Village, Battery Park, and South Street Seaport by riding on the Downtown Loop. Don’t miss the chance to stop at Battery Park to get a good look at the Statue of Liberty. No trip to NYC would be complete without that memory.

Once you’ve satisfied your curiosity regarding the best parts of the city, it’s time to head on over to Yankee Stadium. While you can ride in the lap of luxury by renting a Bronx limousine for the day, if you truly want to get the Yankee’s experience you should walk and take the subway.

The Opening Day game starts at 1:05 pm, so you want to make sure you get there with plenty of time to visit Monument Park. Located behind the fence in center field, this is where you can get a glimpse of baseball royalty. It is filled with plaques and monuments honoring some of the biggest names in Yankee’s history. Monument Park stays open during the season up until 45 minutes before the start of each game, so take your time to find out about these awesome athletes that put the New York Yankee’s on the map.

Now that you’ve filled your day with the best that New York City has to offer, it’s time to settle in to watch a game in one of the most famous baseball stadiums in the world. If you’re lucky, you’ll get to hear the time-honored tradition of Frank Sinatra’s “New York, New York” play over the loud speaker. It gets played every time the Yankee’s celebrate a win.

Opening Day is more than just a chance to watch a game; it gives you the opportunity to provide an endless supply of memories and moments of nostalgia for you and your family for years to come.