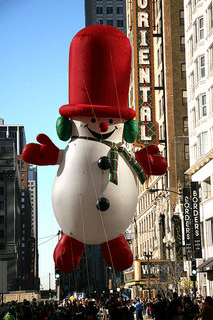 The Macy’s Thanksgiving Day Parade is an age-old tradition that families all over the country look forward to for months of the year. From the gorgeous floats and star-studded spectacles to the overall atmosphere of joy and togetherness, the parade means many things to different people.

Another element of the parade that is unforgettable is the amazing New York City atmosphere. From the huge crowds to the decorations to the unmistakable grandeur of the whole experience, the parade could really be held in no other city. Unfortunately, the city can become a bit crazy during the parade, causing visitors to experience some kind of panic when trying to navigate the streets and make sense of the craziness. If you’re interested in going to the parade this year but don’t know how to get around and make the most of the experience, we’ve compiled a list of tips for doing just that.

BOOK CHAUFFEURED CAR SERVICE TO GET THERE

There’s nothing more frustrating than trying to get a car around Manhattan; that frustration is compounded by an event as huge as the Thanksgiving Day Parade. Don’t consider driving your own car to the destination; you won’t be able to find parking and the navigation aspect of things will likely stress you and your family out long before the first float can be seen.

A chauffeured car is the perfect answer to these concerns. Not only will your chauffeur drop you off close to where the parade begins, eliminating any long, chilly walk or confusing, frustrating and expensive parking concerns, but you’ll get to experience the luxury of chauffeured travel on a day when relaxing and having fun should be number one on your to-do list.

To get a decent spot to see the parade, it’s imperative that you get to the Central Park with plenty of time to spare. Though it will be an early morning for you and your family, there will be nothing like having a close-up spot to see the floats, the stars, and the performances. Especially if you have children, get a good spot is super important for them to be able to see everything.

Making sure that you’re sufficiently bundled for the weather forecast is a huge part of enjoying the parade. Late November in New York City is a chilly time indeed, and not bringing enough coverage to protect you from the elements can ruin the day before it’s even begun.

Celebrating Thanksgiving in style is possible due to amazing events in New York City like the Macy’s Thanksgiving Day Parade. Making the proper provisions for your day in the Big Apple, like booking chauffeured car service for your trip to the Central Park area and back, are easy ways to ensure that your Macy’s Thanksgiving Parade experience goes off with as few hitches as possible.