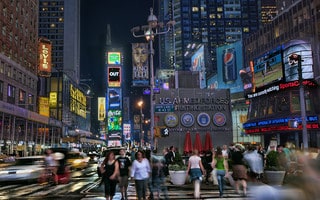 04 Nov EXPERIENCE THE MAGIC OF BROADWAY IN THE FALL

Posted at 07:03h in Sedan Service by DesignME

THE BEST SHOWS ON BROADWAY THIS YEAR

Planning a trip to New York City this fall can mean including any number of activities on your to-do list: visiting Central Park to enjoy the changing leaves, stopping at one of the many New York pizzas shops, or stopping by Broadway to check out one of the outstanding theatrical productions playing. New York City is the heartland of Broadway theatre for a reason, and this year will feature some of the finest productions in recent memory.

We’ve outlined a few of our personal favorites below so you can begin narrowing down your own list.

If you’re interested in musicals, few will entertain as much as this classic, an interpretation of Israel Rank’s great 1907 novel. Showing at the Walter Kerr Theatre, Guide follows the dastardly behavior of Monty Navarro as he discovers his royal heritage and negotiates to eliminate those who stand in his way.

YOU CAN’T TAKE IT WITH YOU AT THE LONGACRE THEATRE

James Earl Jones and Rose Byrne, two stars renowned for their presences on the silver screen, make waves in this adaptation of Moss Hart and George S. Kaufman’s 1936 play. Follow the chaotic first-time meeting of soon-to-be in-laws, as their respective conservative and liberal ideologies clash, creating mayhem and self-discovery.

THE RIVER AT CIRCLE IN THE SQUARE THEATRE

Hugh Jackman stars as “The Man” in the mysterious and evocative story of a man and woman, alone together in a cabin on a moonless night. Jackman, perhaps best known for his film career, is, in fact, a bonafide Broadway star, having won a Tony for his work in The Boy from Oz. This production has a limited cast, and devotes much of its time to the conversation, interpersonal discoveries and observations of the characters, making it perfect for adult theater goers looking for a more cerebral experience.

THIS IS OUR YOUTH AT THE CORT THEATRE

Watch Michael Cera and Kieran Culkin as Warren and Dennis, two dejected, drug-using New Yorkers making their way through a tough weekend in 1982. Cera’s Warren has recently stolen a significant sum of money, and between buying drugs from Dennis and pining after the ethereal Jessica, he finds a way to put his stolen money to use. Michael Cera is outstanding in this portrayal of youthful aimlessness, set during the Reagan era.

THE PHANTOM OF THE OPERA AT MAJESTIC THEATRE

For over 26 years, this multi-Tony Award-winning musical has been titillating Broadway lovers and casual patrons alike. Follow the story of Erik, Christine and Raoul as Christine’s performances as a soprano in the Opera charm and entrance the Phantom, who dwells in the cellars below. Experience the tragedy, emotion and soaring musical performances in this timeless Broadway production this autumn.

CAR SERVICE FOR YOUR NIGHT OUT ON BROADWAY

The main issue that arises when playing for a night out in New York City, especially in populous areas like Broadway, is finding a way to get around. Taxis and ride-sharing services are unpredictable and even dangerous; public transit can’t be guaranteed to arrive on time.

So what’s the answer? New York car service is the most reliable, luxurious and safe way to get around the city, especially on a special night out. Your chauffeur will handle the parking and the navigation, dropping you off right at the theater doors. If you’re planning to go to dinner before or after the show, your chauffeur will have suggestions for great nearby restaurants and bars. Car service is truly the most fitting method of transportation for your night out on Broadway.