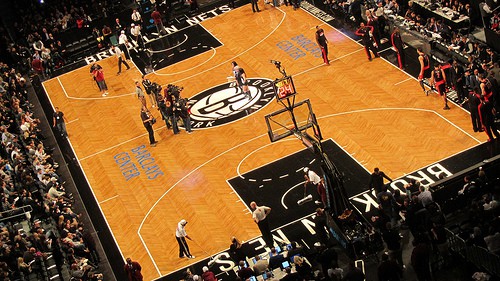 Posted at 08:00h in Limo Service by DesignME

The Brooklyn Nets may have had low attendance in the past, but fans are determined to turn this thing around. Think you’re the guy who’ll get the crowd pumped? Are you determined to be the biggest fan of all the games? You just might be, if you’re willing to do some of the following:

With the opening of the Barclays Center, the Nets were relocated to Brooklyn. While lesser fans may have given up on the team with the rebranding and relocation–true fans took it as a sign that their team was turning the corner. True fans weren’t shaken by the ‘New Jersey to Brooklyn’ conversion, but rather excited about it.

With crazy antics during half time shows, such as the artist who speed-painted a portrait of Deron Williams, some Nets fans aren’t fans of the game at all. If you’re in the seat to watch the game and not the show, you could win the title of biggest fan.

3. You put away your phone.

Courtside seats should be reserved for only the biggest fans—not this guy who kept texting during all the action. If your phone is in your pocket for the duration of the game, you might be in the running for biggest fan.

4. You Experience Loss on a Personal Level

There are some who might say the Nets haven’t been in Brooklyn long enough to build a solid fanbase—that the torture of rooting for a particular team hasn’t had time to truly develop. Well, we say it’s possible to be beleaguered fans. If you feel the wins and losses of the Brooklyn Nets on a visceral level, you could be their biggest fan.

5. You Trash Talk the Knicks with the Best of them

Though the Knicks have a lost and storied past as New York’s favorite son, the Nets are vying for that top spot as the heart of the city. The competition isn’t a new one, but the ferocity has ramped up since the team moved to Brooklyn. This calls for some serious trash-talking if you want to be heard. Still, hate the Knicks? You could be the Nets’ biggest fan.

6. You’re smart enough to get curbside drop-off and pick-up.

Even at the best of times, Brooklyn’s traffic situation can be rough. If you’re smart enough to reserve car service on game nights, that means you and your friends don’t need to worry about traffic snarls and finding parking. Who’s walking in after tip off? Not you. And that’s why you might just be this Brooklyn basketball team’s biggest fan.

Have some brushing up to do before the season starts so you can claim your spot as biggest fan? Don’t worry. There’s still time. Just remember to book your car service early, because plenty of others will be vying for top honors, and that means you could end up without a ride.