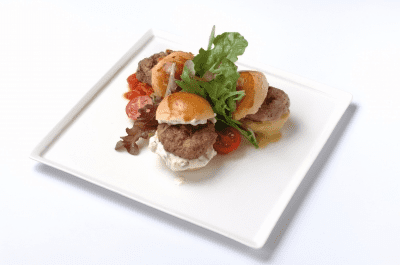 It’s not easy to go hungry at the Barclays Center. Thirty-seven local vendors serve food on site, offering a wide array of options that reflect the diverse cultures of Brooklyn. It’s not your standard arena fare of hot dogs, popcorn and salted soft pretzels, either: Without leaving the Ticketmaster Main Concourse, guests can pick from traditional Cuban fare, Memphis-style barbeque, and two branches of artisan grill Brooklyn Burger. The dining options in surrounding neighborhoods are equally outstanding, and many of the gastro pubs stay open late for dining and drinking after the event at Barclays ends. If you’re making an evening of your Barclays Center tickets with luxury chauffeured transportation, we have some suggestions on where to dine within just miles of the event venue:

Described as “deservedly popular” by Zagat guide, Kaz An Nou is owned and operated by a husband-and-wife team that serves French-Caribbean fare. Given the fact that the restaurant has a no-reservations policy and a cult following, it may be a better choice to dine there after your Barclays Center event if you’re headed out on the weekend. The pricing is reasonable, the duck confit outstanding, and it has a beloved no-corkage fee for patrons who bring their own wine.

Considered by some to be the best dining within site of the Barclays Center, The Vanderbilt is headed straight for a status as an area classic. Food and beverages both fall reasonably into the “mid-priced range” and the menu is dynamic enough to dine regularly without ever getting bored. All culinary items are comprised of seasonal ingredients, which are often locally sourced, and the menu of small plate dishes allow diners to enjoy a variety. Despite the high quality of the fare, the staff members are known for providing the friendliest and least pretentious service in town. It’s also a stellar choice for happy hour before a Nets’ game.

In a city obsessed with happy hour and gastropubs, the fact that Cornelius claims to have “New York’s best gourmet happy hour” is a lofty claim, but one that many foodies believe is true. The menu offers simple and hearty pub fare, and if you head in early for happy hour, you can enjoy $1 Oysters and $4 drafts. While there are few surprises among standard dishes like roasted beet salads, rotisserie chicken, and burgers, daily food specials are available.

Alchemy’s menu is best described as simple, pub-style dining, and CitySearch Editor’s Choice has named it the best comfort food in Brooklyn. There are some unusual items on its menu of burgers and salads, including blackened catfish, duck confit cassoulet, and a wild mushroom barley risotto. It’s an excellent choice for dining out with vegetarians, and the extensive dessert menu makes it a prime choice for a quick nosh after the event at Barclays.

One of the most endearing qualities of Brooklyn’s trattoria Va Beh’ is the owner, who often spends evenings at the door greeting guests warmly in Italian. With a stated mission of “highest quality ingredients, uncomplicated dishes, and no pretense,” it’s a prime choice for fine dining in a relaxed setting. The housemade pasta and smoked fish with crostini make an outstanding meal, and the food is available to go if you wish to enjoy it in the back of your Long Island limo.